This is a note for (the admittedly tiny percentage of) football followers interested in the history of national league revamps...

In the wake of the recent announcement about significant changes to the national league being introduced for 2021, I am again spruiking my 2015 publication:

The National League Debates: A potted chronology of the twists, turns and conflicting ideas in New Zealand football since 1990

As we now revert to a regionalised “superclub-style" format which was also favoured from 1993-95, the most anorakish of you may be interested in reading about the pros and cons of that structure.

The National League Debates examines the historic ferment over the challenges of finding a sustainable format for our flagship competition. (It won NZ Football Media’s Publication of the Year in 2015.)

This 276-page manuscript (sold in PDF format and emailed) sets out a chronology of the twists, turns and conflicting ideas that the code has grappled with over an extended period of time and focuses heavily on the superclub era, and its rise and fall.

Copies can be purchased for just $12 via this website: https://nationalleaguedebates.weebly.com/

The National League Debates is about the politics of the game, and arguments over how our football should be structured, as opposed to physical production of football and the on-field dramas.

And if you don’t like the superclub concept, remember, nothing lasts forever in New Zealand football. (Think of the four points for a win and penalty shootouts for a draw instituted in the 1996 national league. Or the bonus point for scoring more than three goals of the 2000 season.)

Anyway, to have an opinion of merit, you need to be informed. The National League Debates presents all the views for and against... 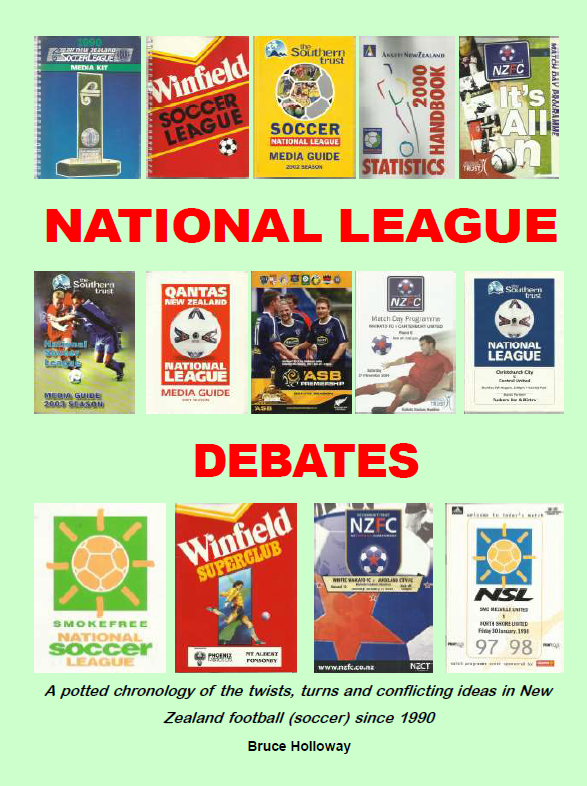