After last season’s successful FFA Cup game at Dolphin Stadium, we are delighted to announce we will be taking three regular season games to Dolphin Stadium in 2019/20.

Tried to get unblocked by Roar. *years after calling out Bersiha for a hand ball at Suncorp.

You can't throw the cheat shout about and expect no repercussions...

Roar have unveiled their 4 new kits for this season 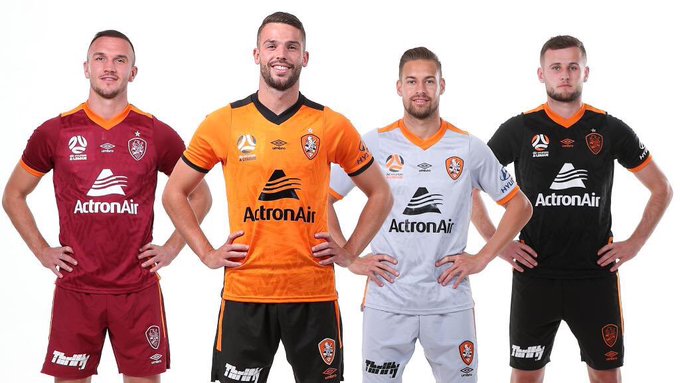 Brisbane Roar’s dream of relocating to a purpose-built boutique stadium is edging closer to reality, with the club in negotiations over the refit of an existing venue which could be rolled out within three years.
Whilst keeping the exact location of the proposed site near the city’s CBD under wraps because of confidentiality clauses in the proposed public/private partnership, vice-chairman Chris Fong believes the planned $60 million venue will be the template all A-League clubs should aspire to.

An initial agreement is in place with project developers for a 12-17,000 capacity stadium at a site with existing viable transport links and infrastructure. Whilst the stadium would require state and federal government backing, along with support from Stadiums Queensland, Fong is optimistic the Roar are close to securing a viable alternative to cavernous Suncorp Stadium.

Brisbane's average gate of 10,540 this season falls short of the break-even figure written into their tenancy agreement which is believed to be 13,000 - a number Fong declined to confirm.

“We are looking at taking an existing sporting venue and reconfiguring it to an exceptional standard - that’s what’s in play at the moment,” Fong told The World Game. “There are development plans and things are moving in the right direction.

“We would of course need support from state and federal government and Stadiums Queensland, and there’s an election coming up this year (in October) but we think it’s a realistic concept which could be up and running in under three years.
“Queensland is becoming more and more a sporting destination (with Australia’s 2023 Women’s World Cup bid and 2032 Olympic bid) and this venue would fill an existing gap in stadium infrastructure.”

Lack of purpose built venues has been an issue across the A-League since its inception, with Brisbane only once able to to draw a crowd in excess of 15,000 to 50,000-capacity Suncorp Stadium since the start of the 2017-18 season - 15,129 turning up for a goalless draw against Wellington in round two last season.

Renovations at Ballymore stadium or Perry Park have long been mentioned as a possible new home for the Roar but Fong has seemingly ruled them out by claiming the proposed venue was not "one of the usual suspects".
Once we get this across the line it will then only be a case of using Suncorp for the bigger games,” added Fong.
“In our one match at Dolphin Stadium so far this season (the 10,000 capacity Redcliffe venue to the north of the city) the feedback and fan experience has terrific in a smaller venue.
“Our coach Robbie Fowler would love to be playing in those atmospheric smaller type venues every week.”

Fong is convinced the construction of a sorely needed new sporting venue in Brisbane would also pave the way for a long mooted second A-League team in the city.
“On a broader scale it will open the door for that to happen, a second team in greater Brisbane,” he added.
“With Dolphin Stadium there already that would be a fantastic location for a second A-League club in the north of the city. 
“We’re definitely going to get a second team here but it won’t happen until there is that second viable venue to play out of.

“Our relationship with Suncorp is still fantastic and I believe it’s one of the best venues in Australia.
“But the problem with many A-League clubs - not just us - is ensuring a high level of entertainment and atmosphere.
“Clearly smaller more intimate stadiums attract crowds - just look at Sydney FC playing out of Jubilee Stadium this season and what a success that’s been.”

Roar fans on Twitter were trying to work it out but they have no inside knowledge. One idea that was thrown around that they seemed to like was Davies Park. However they are very skeptical as Fong is the one pushing it.
coochiee
Marquee

Roar fans on Twitter were trying to work it out but they have no inside knowledge. One idea that was thrown around that they seemed to like was Davies Park. However they are very skeptical as Fong is the one pushing it.

I had a year living in West End. Fair few bars and restaurants that would be walking distance away, but nowhere near a train station. So would need to rely on buses, and maybe construction of a new River Cat stop near the ground. River Cat is a great way to travel around Brisbane's riverside burbs - but their capacity is limited.

It could well be Ipswich, if the Council out there offered a big financial carrot to the Roar. They enticed the Brisbane Lions AFL team to move to a training venue out that way (Springfield). Though they still play actual games at the Gabba.

Davis park looks like it lacks the transport although it looks in a commercial area.

How about a section of Roma Park - has the trains?

Talk is growing louder up north that Brisbane Roar are getting serious about plans for a new boutique home ground - and this column believes there are a number of locations being explored.

The most intriguing and inventive option is in Chandler, a suburb 14km south-east of the Brisbane CBD. There are two velodromes at the Sleeman Sports Complex - the new indoor one, named for Anna Meares, and the old outdoor one, which sources in Queensland say could be successfully converted into a football stadium.

But there are several other possibilities, all of them still on the table. One is near the Brisbane Airport, where the prospect of a new stadium has been discussed for years.

Another is in Victoria Park, just north of the city, where a golf course is set to be transformed into a 45-hectare green space.

And another is in the Logan-Beenleigh corridor, where the Roar have strong political connections.

The Roar refused to comment, but there are a perfect storm of circumstances that could see the long-held dream of an alternative to the 55,000-seat Suncorp Stadium finally come true through a public/private partnership.

The first is the pending Queensland state election. The second is Brisbane's bid to host the 2032 Olympics. The third is FFA's bid to host the 2023 Women's World Cup - which, if successful, could put Suncorp off-limits to the other codes for several weeks.

Football Queensland have made a boutique stadium a strategic priority for the game, while new FFA chief executive James Johnson is a Brisbane boy, and fully understands the lay of the land. Watch this space.

Been told that Brisbane Roar is set to become the next #ALeague club to stand-down its playing group.

Brisbane Roar could quit its Logan headquarters after being hit with council bills of more than $150,000.

David Pourre: “The deal was that we didn’t have to pay anything but in exchange we would offer prestige branding and community services." [Quest]https://t.co/gkwq4LddOB

Brisbane Roar have called on a familiar face to lead the club next season.https://t.co/xRoS6mN61z